8.  Weds Aug 12: The United States (Democracy and ISIS) –Gause and Lustick: “America and the Regional Powers” & Paul and Clarke “A Broad Approach to Countering the Arab State”

Within a week, it has gone from a reluctant observer, abstaining from military action against so-called Islamic State, to full-blown military strikes against the group, opening up its bases to coalition attacks and, simultaneously, the first aerial bombing of PKK Kurdish separatists in northern Iraq in four years.

Why the sudden turnaround?

Here are 6 articles providing an overview of the deal. Before moving on to the articles, there are a few things that should be kept in mind. First, the deal will likely get by congress in the US and the Majlis in Iran. However, over time both sides will accuse the other of cheating and bad-faith, and both sides will try to twist and interpret the deal to their maximum advantage. This will put a lot of pressure on the deal and it could break down later on. Second, the deal is long and complex (120 pages). Even if we think the deal looks good now, it is impossible to tell how the details will play out in practice, especially with both sides jockeying for position and given the turbulence of the region. Third, as with any deal like this, there is an element of risk involved for both sides. If it breaks down both sides will be in a vulnerable position. The only way to judge if the risk is worth taking is to ask ourselves what the alternative would be. The answer to that question is: not very pretty. Fourth, this deal does not deal with the other issues that divide the US and Iran. All it does is buy a 10-15 year window of opportunity to deal with them. If no steps are taken to improve relations in that time, we will be right back where we started when it is over. The articles below speak to these points and others.

1.  “Who got What They Wanted in the Iran Nuclear Deal” (NY Times) explains what each side was asking for and what the eventual compromises were.

2. USAToday has a time line for the steps involved in the deal “Iran deal: Timeline of what happens next”

4. A critique of the deal also from Foreign Policy “How to Get the Most Out of an Iran Nuke Deal” .

“This deal does send an effective sanctions regime up in smoke. It will provide a windfall of as much as $150 billion in frozen Iranian assets, allow this Iranian government to sell oil and conduct dollar transactions again. The early beneficiaries of lifting sanctions will unquestionably be the Iranian political elites and Iranian Revolutionary Guard Forces, because they have preferential economic opportunities. This Iranian government will almost certainly spend a lot more money engaging in terrorism around the world and destabilizing governments in the Middle East. As a result, the deal will deepen allies’ distrust of the United States.”

5. “If you Really Want to Bomb Iran, Take the Deal (Washington Post) which explains how the deal puts Iran in a vulnerable position as well.

“There are three main ways the deal improves the benefits of potential military action. First, one of the main objections to using force is that after Iran is bombed it can reconstitute its program, primarily by building new centrifuges for enrichment. Critics of force often argue Iran could reconstitute quickly because the United States lacks detailed knowledge of the supply chain that would allow Iran to build new centrifuges.”

6. “Why the Iran Deal Makes Obama’s Critics So Angry” (The Atlantic) makes a number of points, among which it argues that this deal is better than no deal:

“The actual alternatives to a deal, in other words, are grim. Which is why critics discuss them as little as possible….”

I am not sure this adds anything really different to the discussion, but the background/impressionistic take on Iran and the deal is worth the read. If anything, the illustration is worth it alone. For those who have seen the wall outside the old US embassy in Tehran, its a very striking image. 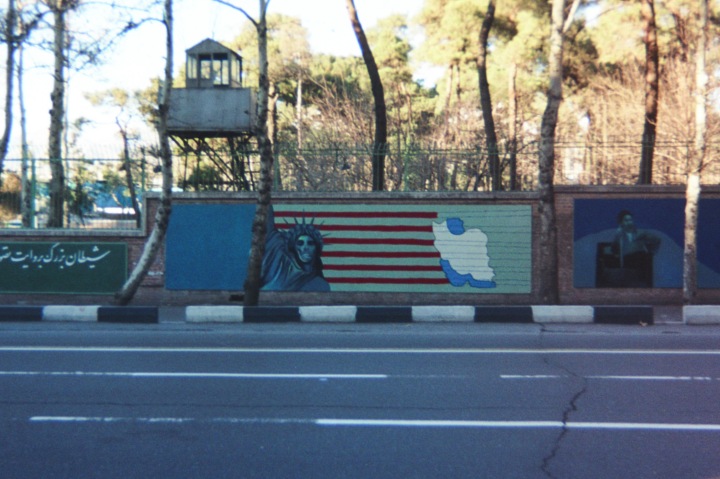 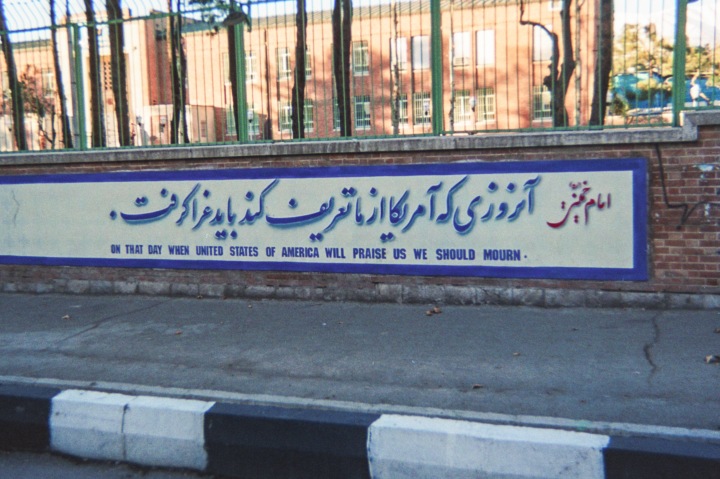 The last 2 pictures I took in 2001. The Skull Statue of Liberty on the first is one of the most striking murals on the old embassy wall. The New Yorker illustration depicts the change that seems to be taking place. The skull has been replaced by a face and they are now shaking hands. The quote on the last picture is from Khomeini. In 2010 that mural was no longer on the wall (some of them have been changed over time), but it should give you an idea of the ideological barriers to making a deal with the US.

Tunisia has declared a state of emergency after the June 26th attack in Sousse, and the UK has advised all British citizens to leave the country today. According to the Foreign Secretary, “While we do not have any information suggesting a specific or imminent threat, since the attack in Sousse the intelligence and threat picture has developed considerably, leading us to the view that a further terrorist attack is highly likely.”

Nevertheless, Tunisia has been the most successful of the new Arab-Spring states:

“The attack was shocking and will further damage the country’s ailing tourism industry, which accounted for 7 percent of the entire economy prior to the last few years of political turbulence. But Tunisia remains full of promise. Alone among the Arab Spring states, it has achieved a remarkable level of political compromise among secular parties and the principal Islamist party, Ennahda.”

An interesting look at the Greek financial crisis as part of a larger systemic problem in the management of the EU eurozone, one that will not get fixed even if a solution to the Greek situation is found.

“What is clear is that the underlying problems of European monetary union – macroeconomic divergences and lack of fiscal policy coordination among a group of countries bound by a single currency and a single monetary policy – have not gone away. Unless these problems are addressed, even a Grexit is unlikely to provide more than a temporary respite for the Eurozone. Without reforms that bring the Eurozone toward closer fiscal integration, restore the severely compromised independence of the European Central Bank, and eliminate the massive debt overhang plaguing the Eurozone’s southern periphery countries, the future of the single currency may be bleak and brief……
Why is this the case? The current episode has highlighted and magnified three potentially fatal weaknesses of the Eurozone, none of which bodes well for the long-term sustainability of the monetary union.”

People rarely talk about leftist and Arab nationalist opposition groups in Saudi Arabia and the Persian Gulf. The focus now is fixated on Salafi extremism. Occasionally, there will be some discussion of liberal opposition and women’s movements (especially when women protest gender discrimination in Saudi Arabia by driving cars through Riyadh). However through the cold war, the left-right schism was the most important division in the Middle East. Rather than Sunnis versus Shi’a, the region was divided between conservative, religious monarchies and Arab-nationalist republics, which were secular somewhat slightly left-wing regimes inspired by Nasser and Ba’thist ideology. This left-right split was a key issue in the Persian Gulf where the Arab monarchies banded together with Shah of Iran to balance Ba’thist Iraq. The Saudis also fought a proxy war in Yemen in the 1960s against Nasser.
The left-right schism lost some of its importance during the 1980s. The Shah was overthrown, and the Islamic Republic of Iran scarred the Saudis so badly they backed Ba’thist Iraq during the Iran-Iraq war -even though they never really trusted Saddam Hussein. The end of the Cold-War and the Iraqi defeat in Kuwait finished the process. The left was “dead” and religious identity became the big issue. Interestingly, Arab spring has brought down virtually all of the Arab republics (Egypt, Syria etc… ) but left the conservative monarchies intact.

“The PYD shot to international prominence in January after it repelled Islamic State of Iraq and the Levant (ISIL) fighters from the besieged town of Kobane. It is now a force in its own right, with not only an organised and disciplined armed wing but also a viable autonomous region in a country embroiled in devastating conflict.
Turkey has no alternative but to accept that a Syrian Kurdistan has become more sovereign and more powerful.”

“In recent weeks, a Turkish backed umbrella group dubbed Jaysh al-Fateh has taken control of Idlib, prompting speculation that the group’s recent advance could mark a turning point in the war. These recent successes are widely attributed to a rapprochement between Saudi Arabia and Turkey – two critical regional players in Syria that had hitherto supported different factions in northern Syria.

The United States has quietly acquiesced to the resurgent Saudi-Turkish role in Syria, but the prevalence of al-Qaeda affiliate Jabhat al Nusra and ally Ahrar al-Sham in recent offensives will certainly complicate on-going discussions about whether to provide air cover for rebel battalions in the north. This key divergence could further complicate US-Turkish relations, despite the recent agreement to train-and-equip up to 15,000 Syrian rebels in Turkey, Jordan, and Saudi Arabia.”

“But whether that changes the actual Western discourse around Iran is another matter. Every society or culture gets stereotyped in some way by others — but Iran, even before the rise of the Islamic Republic in 1979, has been a very conspicuous victim.

That’s in part a consequence of its history. As the inheritor of Persia’s ancient empires, Iran has been the Other — the enemy of the nominal “West” — since classical times and the famous wars with Greek city-states. In the 18th century, some European writers and thinkers popularized the image of a “decadent” and “despotic” Persia as an allegorical device to critique their own societies. A century later, as Europe’s empires gained in power, the Orientalist cliches hardened and served to bolster the West’s own sense of racial and moral superiority.”