Everything you ever wanted to know about the Middle East explained through maps, from Mesopotamia through the Ottomans to the Arab Israeli wars, the Arab Spring and the spread of Syrian refugees.

Robert Kaplan has penned a provocative piece in Foreign Policy entitles “The Ruins of Empire in the Middle East” where in he argues for the virtues of empire in the Middle East as a means for maintaining stability: “Imperialism bestowed order, however retrograde it may have been. The challenge now is less to establish democracy than to reestablish order. For without order, there is no freedom for anyone.” http://foreignpolicy.com/2015/05/25/its-time-to-bring-imperialism-back-to-the-middle-east-syria-iraq-islamic-state-iran/

Not surprisingly, there has been a response. Benjamin Denison and Andrew Lebovich argue that Kaplan’s history is shaky and vague at best, and that “Kaplan and others call for imperialism-lite — without acknowledging that empires aren’t always sunny, stable and successful. Policymakers and scholars alike need accurate historical examinations of imperial rule, and need to stay alert to the ways in which local politics, outside political forces and military intervention affect countries in untold and infinitely complex ways.”

The debate also raises a deeper question about the nature of the state system in the Middle East. Since the rise of IS it has become increasingly popular to argue that the Middle East state system is entirely artificial, a remnant of the Sykes-Picot agreement, and therefore unsustainable. In two separate articles, Marc Lynch and Sarah Pursley argue that the history and the current reality are too complex to be captured by this common though simplistic argument.
Lynch argues in “Rethinking Nations in the Middle East” that identities based on the current state system do have resonance: http://www.washingtonpost.com/blogs/monkey-cage/wp/2015/06/02/rethinking-nations-in-the-middle-east/

And in a two part article,’Lines Drawn on an Empty Map’: Iraq’s Borders and the Legend of the Artificial State (Part 1 & 2)’ Pursley describes the division of the Middle East as a complex process at least in part influenced by local politics:
http://www.jadaliyya.com/pages/index/21759/lines-drawn-on-an-empty-map_iraq%E2%80%99s-borders-and-the
http://www.jadaliyya.com/pages/index/21780/lines-drawn-on-an-empty-map_iraq%E2%80%99s-borders-and-the

Since the Islamic State seized Mosul last summer, there has been a great deal of time spent discussing the dysfunctional nature of the Sykes-Picot border system drawn up after WW1. While there is no denying the borders did not reflect the political and social reality on the ground, the problem should not be over simplified. No matter where the borders were drawn they would have been disputed. That is not meant to minimize the mistakes made by the British and the French. Rather it means there was no simple neat way to establish a state system in the middle east even if the borders were drawn up with the best intentions. This continues to be true. There is no simple neat way to fix the mistakes of the past. Any attempt to redraw the current borders will be contested, violently in all likelihood. The states involved will object, of course, and the various political and social communities are too intertwined to be divided cleanly. 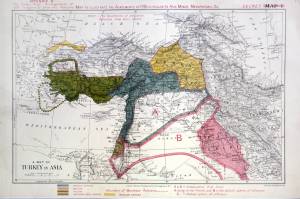 Gertrude of Arabia, the Woman Who Invented Iraq

Some useful background on the creation of the modern Iraqi state, and a rare bit of attention for Gertrude Bell, a women whose contributions to history have been unfairly overshadowed by those of TE Lawrence.